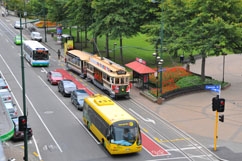 Famous internationally as the 'Garden City' Christchurch has a lot to offer its visitors. For an up to date report on what is happening and when, you can visit the Christchurch City activities website.

Lorenzo Motor Lodge is walking distance to both Hagley Park and The Botanic Gardens both of which stand up to the Garden City's reputation as one of the best botanical tourist destinations in the world.

Awarded the Ellerslie International Flower Show from Auckland, Christchurch played host for the first time in March 2009. This colourful event takes place around the second week in March. The devastating earthquakes in September 2010 and February 2011 forced the city to cancel the 2011 show. The 2012 event was top class and the 2013 Ellerslie Flower Show will be from 7 - 10 March. Book your accommodation now at Lorenzo Motor Lodge, just 300 meters from the venue.

The Gondola on the Port Hills (about to re-open in January 2013) and the Christchurch Tram are not operating just now, but Punting on the Avon is still available.

As Christchurch is the largest city in the South Island, many cultural, musical or sporting events take place in the city. Horncastle Arena is the only major event centre still remaining at present, but watch this space for others to return. You can check Horncastle Arena above for up-coming events by clicking on their link. The new home for the champion Crusaders is in full swing at Christchurch Park, just a 30 minute walk from Lorenzo.